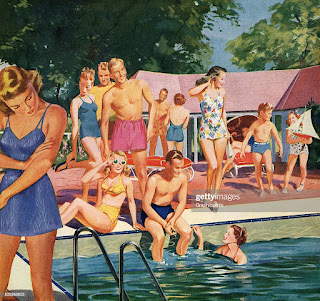 I'm conscious that the ramblings on my blog don't always paint the men I've met in a very positive light. Hopefully this will redress the balance and I'll write about the time a man saved my life.

The majority of my adult life has been spent in relationships. I met my second partner in 2000 and on the whole we were happy together until our incompatibilities and circumstances drove us apart and we eventually split up in 2007. I haven't always spent my life going on dates from Hell.

In June 2002 I decided I couldn't think of any birthday presents I wanted and my partner suggested he put some money towards a cheap holiday abroad. We trudged off to the travel agents and found a really cheap deal to Greece. The flights were at terrible times, we needed to get to Birmingham airport and the resort and accommodation were "allocation on arrival". All we knew is that we were going to Crete and it was cheap and three stars, which sounded good. I packed a load of paperbacks, my "Rough Guide to Greece" and was looking forward to a relaxing week of tavernas and sauntering about whitewashed Greek villages. I'd recently recovered from a bout of depression which had left me still feeling fragile and in fear of the bad days returning.

We arrived in Crete in the middle of the night and my heart sank a little when the coach dropped us in Malia, the clubbing capital of the island. We walked down the main street, which was full of drunken teenagers lurching about, and found our hotel. We were unimpressed. The hotel was over a bar and we had to shout for the elderly man at reception to hear us over the thudding bass of the music. The room looked like a depiction of a post-apocalyptic dream. There were cheap metal shutters over the patio doors, the balcony rail was constructed out of wire and string and the bathroom was very strangely laid out. The shower was actually over the toilet. I never figured that one out. The walls were made of plasterboard and were vibrating with the music from the bar. During the brief pauses in the music you could hear the couple in the next room snoring. I stepped out onto the balcony and the heat was oppressive. The view was unimpressive: a strip of bars with plastic sheeting and neon signs, people vomiting in the street and a tiny beach where people went to have sex. We managed an hour or so of fitful sleep and then went down to see the rep.

The rep was about 20 and very tanned with one of those cheese grater voices that suggest you've smoked your way through a hell of lot of Park Drives and had one or two late nights on the lash. His companion was a younger boy, who was hangover-grey beneath a tan and was intermittently running off to retch into a flowerpot. We were lucky in that we were first to get there (thanks to the alarm on my phone) and by the time we left with an upgraded hotel for an extra £50, there was a queue of disgruntled people, including two young women who were sobbing.

The new hotel was almost perfect. It was in the whitewashed Old Town. The room was airy with oversized dark wood furniture, white cotton sheets and cool floor tiles. Worryingly, it was a club 18-30 hotel. We were 31 and 35. Our room overlooked the pool where all the banana smuggling, wet t-shirt, "crazy" DJ activities took place. Classy. Some of the boys were cute though, which pleased my partner. He was quite happy to sit on the balcony in his sunglasses pretending to read. I read a lot (I may have occasionally ogled the odd particularly fine specimen, I'm not divulging). Sleeping at night would have been nice, though.

Malia Old Town was everything I'd hoped our holiday destination would be. I loved having a good peer into the open doors of the little white houses and nosing at the little old ladies in black sitting in their lace-decked lairs. I loved the town square with its promenading women and strutting boys. There was Jasmine growing everywhere and loads of cheap tavernas selling traditional Greek food. We even saw a Greek wedding at the Orthodox Church which looked lavish. Oddly, no one from the hotel seemed to venture here. I liked the fact that the place seemed so primitive and old fashioned. I was especially impressed by the butcher chopping meat with a cleaver whilst holding a smouldering cigarette in his mouth and swigging neat vodka from a bottle on the counter. The "bar street" was always packed with people from noon onwards, eating egg and chips on sweaty plastic chairs and squinting through merciless hangovers as they sampled hair of the dog.

We decided not to be snobbish about the whole thing and went for a few nights out in the bars. We both liked a drink. It was relentless. The "P.R." people on the bar fronts would stoop to anything to try and get you in to their bars, including man handling. They'd grab at you, block your path and shout to you. I hate being called "mate" at the best of times. I struck on the idea of feigning deafness and we soon found that walking along doing fake sign language to each other deterred even the most eager youth from trying their hand at getting your custom.

We settled in a bar and I must admit that a few vodkas made me feel better disposed. We got talking to a couple of sisters from London who were as horrified as I was at how rough the whole place was. It was like watching an anthropological experiment and good to find we weren't the only ones who weren't off our faces on cocktails, humping things randomly.

I think the alcohol helped as before long we tagged onto a bar crawl which was hilarious. I vaguely recall dancing on a bar counter and deciding to break dance to Run DMC. My electric boogaloo was second to none but those grazes from doing "the turtle" took some healing.

After a few days we were a bit restless as neither of us were good at sunbathing, my partner always ended up red and I ended up irritable. We hired a Smart car and took off for the mountains. I'd found an entry in my "Rough Guide" which described a fantastic monastery with a walled garden where the welcoming monks would let you look around the walled gardens and their underground chapel. We threw jeans onto the back seat, to change into for propriety's sake, and headed up the mountain. To say that the journey up was hairy is an understatement. Smart cars are not made for 45 degree inclines. Going down was easier (after the monks failed to respond to us hammering on the door) and the incline was useful as we had only a few fumes of petrol left and we had to take the brakes off and coast down.

We had a relaxing lunch and drove by Spinalonga, the leper colony described in the novel called "The Island" by Victoria Hislop. I saw a funny little sign leading to a cliff side walk and decided it would be good to follow this. It was a narrow path on the edge of a ravine with a rickety rail. We walked along, tentatively, for about a mile until we came to a cave. Entering the cave we spotted another cave ahead, oddly lit by a flickering light. We were both a bit startled to see a glass coffin with a skeleton inside and the walk back to the car was much quicker.

We decided to go to the beach. I'm not a beach lover. The sea is a bit scary and who wants sand in their crevices? It was a bit hot for a delicate English flower like me too. I hadn't remembered the rep on the coach telling us that the sea was dodgy there, as there were tidal undercurrents, but who listens to reps?

We went in the sea and walked out up to our chests. I splashed about a bit, swimming like a sickly dog, as ever. I'm not a good swimmer but there were no red flags and (perhaps more worryingly) no lifeguards. It was all fine and dandy until after about 5 minutes swimming I noticed that the perspective had changed. The beach had moved by a quarter of a mile. I tried to stand but the sea bed had gone too. Swimming back wasn't easy as the current was against me and before long both the beach and my partner were a good half mile away. The sea was getting choppy and I could feel myself being dragged out further. I was thrown about and buffeted and waves went over my head and I went under a couple of times as it dawned on me that I was about to drown. It's been theorised that drowning is a pleasant way to die but I'm not convinced. This was scary. I tried to tread water and had a quick think about whether it was worth staying alive (it was) and then felt myself go under again as huge wave hit my face.

Naturally, I didn't drown. My partner spotted me and swam out. Being 6 foot 2, broad and a better swimming he managed to drag me back in with ease.
"Fucking hell! How bloody embarrassing. Do you think anyone saw me?" I said, coughing up water.
He gave me on one of his looks and reminded me that dignity wasn't the main issue here.
"You're like David Hasselhoff!". He wasn't amused again but he had chosen to wear red shorts. It was like a particularly naff scene off Baywatch.
I staggered to where my clothes were, collapsed onto a towel and began fumbling around.
"What are you looking for?"
"A cigarette!" I spluttered and began dragging on a Marlboro Light. At this point he sat back down, resigned to his fate, being on holiday with a twat.

I forced myself to go swimming again the next day and was very flippant about the whole thing. It wasn't until a few months later that I woke up gasping from the first of many drowning dreams that I realised I'd almost died. I've not been in the sea since.

The point of this tale is to explain that I don't think all the men I've met are bad. Some are long suffering and save you from drowning. The relationships don't always work out in the end and neither of you is ever perfect but at least you stay alive.
Posted by C at Sunday, July 17, 2011