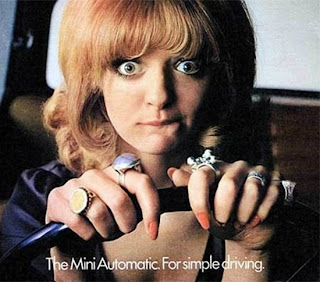 I have a secret belief that the majority of people in society are witches. I'll clarify: people who can ride bicycles are witches and possess strange skills. I could never get my head round the whole balancing thing and the artful coordination of hands and feet. It surely involves some kind of mysterious satanic skills. My father tried, on a few occasions, to teach me to ride a bike and I failed every time, falling without grace onto the ground, followed by a fit of sulking at the indignity of the whole business. I never really got beyond the tricycle and so decided as a teenager that riding a bike wasn't for me. It wouldn't have been at all well received had I turned up to school on a tricycle. I skill gasp at people riding bicycles from time to time as I wonder how the hell they ride them (or occasionally, how they have the gall to leave the house looking so lumpy in lycra).

I was always puzzled by peoples interest in driving. I didn't really have any interest in cars and have always described them by colour only. Aged nine, I remember a friend shouting out every model and make of car as we walked along the street. I was puzzled as to why you'd ever want to know this and what purpose it would serve. I certainly don't understand car magazines and programs. I get more excited about a nice washer or a particularly stylish vacuum cleaner. I love to Hoover.

I left home at 17 and didn't really have much money, so the traditional act of learning to drive as a teenager was out. I also lived in the centre of the city for years, so driving was never an issue. In 2000, I left my long term partner and lived on my own for a while and decided maybe, it was a good time to learn to drive now. I'd just started a new job, got a new boyfriend, got my first flat on my own and was rapidly hurtling towards 30, so I decided it was now or never. In retrospect, I was also rapidly hurtling towards a nervous breakdown, bought on by a rapid succession of life changes, so maybe it wasn't such a good time.

The driving instructor was recommended because he was laid back and let you pull over and smoke cigarettes during the lessons. I was right in thinking I'd need to smoke but hadn't anticipated that he'd need to smoke much more urgently than I did. He arrived and picked me up from work and I was petrified. I could feel sweat soaking my back and I'd spent most of the morning with a nervous stomach ache and a fine hand tremor. I wasn't too impressed when he told me it would be like "riding a bike" and instantly felt more panicky. Riding a bike meant grazes, failure and my dad shouting a lot.

He gave a lovely description of the internal combustion engine which may as well have been in Urdu for all I understood it. Apparently, he also wanted me to coordinate my hands and feet separately. I didn't realise it would be so complicated. We lasted 15 minutes and he suggested we stop for a cigarette which I hastily dragged on, as did he. I felt like the lesson lasted about 3 hours. I got home and it was a further 3 hours before I could unclench my fists and my colour returned from grey to pink. I felt like I'd been on an out of control rollercoaster. I also had remembered on essential problem with driving lessons: I hate people telling me what to do.

I lasted for about 5 lessons, I think. I remember trembling in fear, pacing my flat each time he was due to come, secretly wishing some minor ailment on him so he wouldn't arrive. His laid back persona didn't fare well next to my twitching neurosis and he soon grew snappy and tense. Initially he tended to recline in his seat but after the first lesson he grew gradually more anxious and would be hunched forward, ready to grasp his He-man dual controls, shouting at me as I flushed and shouted back. I'm sure he was relieved when I gave in. If at first you don't succeed then accept it, it's probably not for you, is my more sensible version of the motto.

I'm resigned to public transport. Yes, it's smelly and people are often vile to be near but hey ho, it can be entertaining. You certainly see life and you can eavesdrop. Some people are made to drive, some to be driven.
Posted by C at Wednesday, August 03, 2011