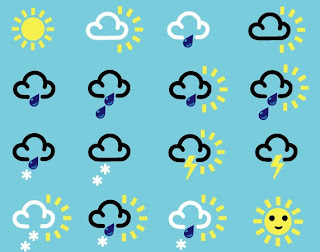 An ex partner of mine once commented that I don’t actually like weather. He was right in some ways. I think, what he was succinctly saying, was that I moan a lot about the weather all year round. I think he was also implying that I moan a lot about everything. I was thinking about this during the week as England was hit by a spot of freak weather. Temperatures were up to an unseasonal 29 degrees and we had the sort of temperatures you’d normally expect mid August. Naturally, I complained a lot.
In winter I yearn for daylight and spring bulbs and miss my sunglasses. In Spring I long for summer and not having to wear a coat. In summer I sweat a lot and miss my coat and in autumn I dread the coming winter and hate the messiness of the dying foliage.
I don’t really like hot weather much for that matter. I’m fair skinned, sweat a lot and burn. Sun bathing makes me restless and uncomfortable and gives me a headache. I hate to see too much exposed flesh, unless it’s on a particular foxy man. Let’s face it though; it’s not usually the foxy men exposing too much flesh once the sun shines. It’s more likely to be a middle aged man with a paunch or a larger lady.
Public transport is even more of a nightmare than usual. The concept of deodorising is alien to many and the bus drivers seem to sadistically turn the heaters up high once it hits the mid twenties. Work is no fun, hospitals aren’t great at the best of times but during a hot spell they’re no fun at all. The struggling NHS can’t splash out on air con when there are hips to be replaced.  Plastic aprons and gloves aren’t much fun to wear on a ward in high temperatures. I accept this but hate it equally.
No one looks good in flip flops. Feet should be hidden at all times and this should be enshrined in law. I get hay fever (of course) and itch and sneeze a lot. Life becomes an ordeal in extreme heat. Doing anything involves an effort to shrug off the associated torpor first. Bugs love me and I’m a martyr to bites and heat lumps. Harsh sunlight can be so bleak and stark.
Mind you, we’re more likely to get rain than hot sunshine. I dislike rain. It’s annoying and there’s that whole business of when it’s too early or too late to put up your umbrella. That’s if you’ve remembered your umbrella or if the wind isn’t too strong to hold one aloft. Public transport is again a nightmare as the masses reek of damp trouser and drip and steam all over the buses. The greyness and lack of sun is depressing too. It’s certainly no fun being a smoker in the rain, sheltering under a tree to indulge in your illicit pleasures. Spectacle wearing is no walk in the park either. They never come with little windscreen wipers.
Did I just mention wind? Windy weather is such a pain. The irritating force to contend with as it makes your eyes water. It’s not good to be buffeted unless you’re in a rush and you’re lucky enough to have the rare joy of the wind behind you. You’re more likely to get chapped skin and facial neuralgia. It keeps you awake at night with its ghostly howling. Its nastiness is trumped only by snow.
Snow is the most evil of all. We don’t cope with it well in Britain. The country grinds to a halt as we step out in shoes with no grip and unsuitable trousers which end up rimed with salt. We slip and slide and have palpitations as we lurch our way towards fractures and imminent traction. It’s a scary business. It hurts and my memories of being an openly gay 15 year old schoolboy on a snowy day involve snowballs slamming into the back of my head along with the taunts. I still get a ball of dread when i wake up and it’s snowed, until I remember that at 40, I no longer have to worry about the walk to school.
One type of weather I do love is a storm. As a child, I was out on the local park and lightening struck the ground ten feet from where I was. It was an amazing sight and being aged about 5, I didn’t perceive the danger, just thought it was a dazzling spectacle. The local church got struck too which seemed a strange thing to happen. I loved the storms I experienced in Paris one August, incredibly dramatic and powerful and quite humbling. Mind you, the atmospheric tension does tend to give me a right headache so on second thoughts, storms are out of the equation too.
Maybe he was right. I just don’t like weather. I’m definitely not one of those people who describe themselves as “outdoorsy” and have been known to call myself “indoorsy”. Perhaps it’s just outside which I dislike.
We’re probably quite lucky in Britain; we don’t have too many extremes of weather, just a general greyness. We shouldn’t moan about it but we generally do. That’s the answer I think, I’m just English.

I'll leave you with a lovely moany poem by the brilliant Wendy Cope.

January's grey and slushy,
February's chill and drear,
March is wild and wet and windy,
April seldon brings much cheer.
In May, a day or two of sunshine,
Three or four in June, perhaps.
July is usually filthy,
August skies are open taps.
In September things start dying,
Then comes cold October mist.
November we make plans to spend
The best part of December pissed
Posted by C at Tuesday, October 04, 2011