Ramblings: I (Don't) Want to Ride My Bicycle 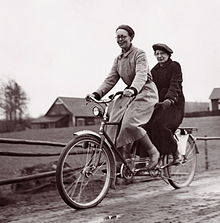 I think I may have mentioned before, but one of my oddities is that I can’t ride a bike. If I tell people this they look at me gone out like I’ve just said I’m a hermaphrodite or I can’t write my own name. It’s considered, by most people, to be decidedly odd. I personally think that riding a bike is even odder. In fact, I’d go so far as to say I think its witchcraft.
I’ve always been a bit clumsy. I trip over a lot, am prone to bumping into things and am generally uncoordinated. I have mismatched eyes. Not like David Bowie, a green and a brown one, but I have one very long sighted one and one almost normal eye. The first time an optician noted this when I went for an eye test aged 12, he asked me if I was especially clumsy and accident prone. My mother nodded eagerly, finally latching onto to a diagnosis to explain my bizarre mishaps. Recently an optician asked me if I wore my glasses to drive. When I told her I didn’t drive, I’m sure it wasn’t just my imagination that made me see a look of relief wash over her.
I also have terrible balance. I’m rubbish at standing on one leg (I practice often), could never master stilt walking or roller skating as a child and the very thought of ice skating or skiing gives me an icy chill and a vision of plaster of Paris and traction. I get terrible travel sickness and have been known to run out of films with wobbly camcorder type shots, green faced. If I try to send text messages in a moving car I start to feel dizzy and throw up. I have to look away when a fast moving train goes by or I start to spin and I never liked roundabouts or fairground rides that spin round. I once spent a whole evening in bed with a bucket beside me after an ill advised go on the Waltzers aged 7.
These are my excuses for not mastering the art of staying upright on a bicycle. I had the usual sit in and push along cars as a toddler, progressed to the tricycle then onto the little bike with stabilisers. Then the problems began. My father developed a permanent frown and a mouth full of tightly gritted teeth as we repeatedly tried to get me to stay aloft a bike without 4 wheels. He’d push me along, let go and I’d fall off. This went on ad-nauseum, usually until I trooped off home in a strop, abandoning the bicycle with a wobbly bottom lip and a lot of bruises.
I’m not one for perseverance. “I’ve tried it once and didn’t like it” or “If at first you don’t succeed then give the bastard thing up as a bad job and avoid ever trying again” could well be ideal mottos for me. The shiny bicycle which my dad had bought second hand and lovingly restored stayed in the shed until we sold it and I spent the money on books. You know where you are with books (just don’t ask me to balance one on my head).
To be honest, I don’t feel the need to justify my inability to balance on a bike. I look at people going past on them and am startled by what a weird thing it is to do. Surely it’s some kind of sorcery? These people must have magic powers. Balancing on two wheels is nonsensical.
I knew I was on to a loser when attempting to learn to drive my instructor said to me on my first lesson: “It’s much like riding a bike” followed not long after by “You can’t ride a bike? What! How strange”
I’m happy to walk, thanks.
Posted by C at Tuesday, December 13, 2011