Ramblings: Hair of the Dog 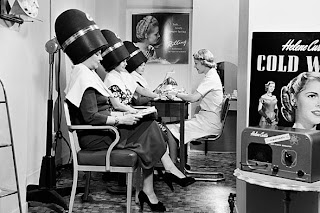 I’ve been growing my hair lately. It’s a final fling thing. It’s receding a little at the front, getting thinner by the day on top and getting darker and weaker. It’s a short step away till I have to shave the lot off or embrace the comb over.
It set me thinking about tragic hairstyles I’ve nurtured over the years. I became obsessed with my hair from an early age and was turning my nose up at the foul smelling brown Vosene we were made to use from about 5 years old. I hated the stuff and would sneak dollops of my mum’s shampoo when no one was looking. I had a huge mop of hair, generally chopped into a pudding basin style by my inept mother with an asymmetrical fringe. Old ladies would comment on my huge mop of white blond hair and I’d lap it up, preening for them and flicking my head like a shampoo advert model. I liked it clean, shiny and well groomed.
As the 1980s progressed I grew a lovely flick. I blame Lady Di. Everyone wanted a luscious fringe, flicked to one side, which we could make cow eyes from under. It was all the rage. I’d practice in the mirror, looking coyly upwards and gazing towards my non-existent Prince Charming. Luckily, I chose to wear seatbelts though. She wasn’t always such a good example to follow.
My teenage years were marred by the hideous permanent wave which a hairdresser talked me into. Aged 13 I was bemoaning the fact that my hair was so flat and lifeless with no body. The mid eighties perm was fashionable for men and he talked me into parting with my pocket money for one. I spent an inordinate amount of time sitting with thick lotion that smelled like a colostomy bag on my hair. He told me it wouldn’t be curly, just thick and full of body so I could look like James Dean. He lied. I looked like Deirdre Barlow from Coronation Street. It was a mess of tight curls which would have made any potential Black and White Minstrel shine green with envy under his face paint. I spent many frantic hours with a blow dryer trying to make it less curly but to no avail. It was truly hideous.
I then discovered hair dye. I decided to become a Goth. I took to wearing black clothes and mooching about in a baggy old black cardigan and Dock Martins, moaning about how my life was over already and obsessing about death. I spent hours interpreting lyrics by Siouxsie Sioux and The Cure and reading the bleaker poems of Sylvia Plath. I needed the hair to go with my black nail polish and my fake black moods. I plastered my head in hair dye and came out with a quiff of raven black hair which made me look pasty and anaemic. I looked more like Bert off Sesame Street than an Indie pop star. A huge candyfloss arrangement of dry black fluff sat on top of my head. The carpet, my ears, my neck and my forehead looked less anaemic than me, all sporting spots of black dye. I had black ear tips and a grey neck which wasn’t attractive. I tackled my ears and neck with a pumice stone and ended up looking like I had a bad case of eczema.
I didn’t learn. I toyed with burgundy dye, various types of black dye, red streaks. It all looked terrible but I thought I looked amazing. My blond roots would come out shocking pink. I was caught in a rain storm at Nottingham University one day and came in to find my face had red streaks running down it, making me look like I’d sustained a head injury. I wondered why people had been looking at me oddly on the bus.
I went back to mousy blond after it started to fall out in tufts. I’d wake up in the morning to a thatch of black hair on the pillow. I then discovered Sun-In, a noxious peroxide solution which turned your hair a brassy orange colour and took a layer of skin off your scalp. I spent years with a brushed forward white/orange head with flaking scalp, applying enough cheap hairspray to rip holes in the toughest of ozone layers (yes, I confess, it was me who ruined the environment).
In the late 90s I discovered the clippers and the liberating act of having no hair to worry about. What total bliss to jump out of the shower and rub your head with a towel and be on your way. This gave way to the messed up, spiky do, with little bits of cream bleach rubbed onto the tips. It was all the rage in the late 90s, honestly. Another liberating return to a shaved head and dispensing with hours listening to hairdresser chatter whilst bleach soaked in, ensued.
On reflection, maybe the baldness will be better. The obsession we have with our hair wastes so much time and is so inane. It’s time I could spend reading a good novel. I was on the bus one day when two very camp lads got on and sat a few seats behind me. They were young hairdressers and were chatting about their day at work. One of them whispered loudly to the other “He’s quite cute, the bloke down the front.” They meant me; I was the only other man on the bus. The other one said to him “Yes, but he’s got a double crown. They’re so hard to style!” With that, a non-starter of a romance was scotched. All because of hair.
In the interests of justice I would like to point out the following: I've never had a mullet or a centre parting. Thank you.
Posted by C at Friday, January 27, 2012