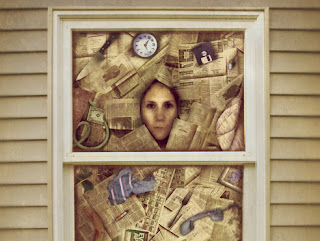 I did something momentous last night. I threw away the watch I had brought for my 21st birthday. I have a very happy and close relationship with my bin. I love to throw things away. It’s almost like the opposite of hoarding. Try it, it’s liberating. The feeling of dropping it into the bin was second to none.
I spent my teenage years and early twenties amassing things and then spent my thirties slowly throwing them all away. I had sentimental views. I took endless pictures and pored over them, painstakingly applying them onto the pages of photograph albums. I cut out clippings, saved old college work, school reports and cards which I liked. I hoarded old theatre tickets and programs. I would never have given away a book which I liked and had over a thousand of them. I had piles of old magazines. I would like to add a disclaimer: these items were all stored tidily.
I moved house often during the 1990s, changing address with circumstance and financial situation during the turbulent relationship with the much older man. The things I loved became items I hated to pack and it was during the final move that I realised something had to be done. It was getting mad packing and unpacking all this detritus of a so far not so happy life. I purged. It was a fantastic purge too. Bags of books were carted off to Oxfam. Clothes I hadn’t worn in a year or more were mercilessly sent to the recycling. It was very liberating.
Once I’d split with him and was living alone I cleansed further, going through my belongings like a mean dictator goes through peasants. I felt so relieved to be away from him and to have escaped the relationship with everything but my sanity intact. Suddenly the idea of a flat full of reminders of the past seemed superfluous. I binned nearly all of the photographs from the 12 year relationship. I kept just a few of me which I liked, where the pretence of happiness wasn’t too obviously fake. I kept only two photos of him (to remind me how much I hate him) and nothing else. My twenty or so albums were whittled down to only one.
The school reports were shredded. Why the hell was I keeping a load of pieces of paper with derogatory comments by a sadistic sports teacher with the brain power of a particularly dense hamster? I lobbed 15 years of old theatre and cinema tickets. They weren’t getting me access to anywhere. I dispatched ugly ornaments bought for me in my teens. I wondered why I was keeping folders of notes from courses I’d taken in the early nineties. If I want to know functions of the endocrine system I’m more likely to look it up online or in a book than to root through some badly scrawled notes in a dusty folder.
I became relentless. Nothing stood in my path for long. Scratched vinyl records from the eighties, expired passports, yellowing magazines and birthday cards from 20 years ago were cleansed.  Some items went under the radar. The watch is a prime example. I liked the watch when it was bought for me in 1992. I don’t like it now. It has no monetary value and also has an insincere engraving on the back from the man I now hate. Surely it deserves to fester in a rubbish tip rather than in my drawer?
I don’t miss these items. I never look for them or long for them. I used to think these items would be nice to have when I get old, to give me memories. A sad fact of old age is that as my brain cells die off the old memories will get exposed. The best things to keep are those from the present. If I ever reach 90 I’ll probably be capable of recalling the 80s with the perfect clarity. I suspect I won’t need old school reports to remind me how awful that decade was.
The other advantage of throwing my stuff out is that I can replace it with other people’s discarded crap which is so much more interesting. I have vintage telephones and typewriters, a postcard sent from a woman called Enid to her friend Mabel in Coventry and a suit worn by someone long dead. Just one thing though, touch my collection of 25 years worth of theatre programs and I’ll have your arm off.
Posted by C at Friday, February 17, 2012