Ramblings: ...and the Living is Easy 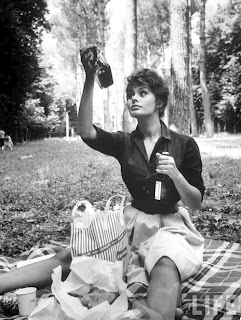 It’s officially Summer here in England. It’s been moderately warm for two days after a long period of heavy rain. I’ve downgraded my duvet, sneezed a lot and had a few sticky areas. Every year I forget that I get hay fever until the first sneezing fit.
I always imagine that summer will bring out topless toned studs and beautiful people but sadly it doesn’t. The only topless men wandering around are generally puny chav boys from the local council estate who walk around in nylon tracksuits with their concave white chests and odd coloured nipples on show.
The joys of public transport are suddenly less pronounced. I’m not sure quite how people can smell so bad after two days of heat but somehow they manage it. There are some hideous sights too. Rolls of back fat break free from too-tight tops, yellow gnarled toe nails inch towards the sunlight from grubby sandals and lurid colours abound. Livid sunburn makes my eyes want to shout “Ouch!” There are many people who are better hidden behind bulky coats.
There are good things too, of course. People seem happier, the city looks a bit less dreary and indolence is celebrated. I can freely lounge on the sofa with not a twinge of guilt. It’s too hot to move so reading a book is the only option.
I didn’t relish summertime too much as a child. It meant swollen eyes, a runny nose and a general encouragement to leave my books behind and venture outside and do things. None of these things seemed good. I burn just thinking about the sun. I had ridiculously fair skin and white hair and once ended up hospitalised for a week with sun burn and blisters. I used to get terrible headaches when we went on interminable family fishing trips on hot days and I hated wearing the cap my mother presented me with. This was probably because, coupled with my emaciated frame and pale skin, it made me look I was on chemotherapy and I noted the pitying glances that I received.
I cope with summer now that I’m an adult. Like most British people I like to complain about the weather. It’s our national hobby. I see it for what it is though, now. It’s a transient season that passes all too quickly as life revs up faster and faster the older I get. I try to enjoy it.
Posted by C at Friday, May 25, 2012