Ramblings: You Scumbag, You Maggot, You Cheap Lousy Faggot 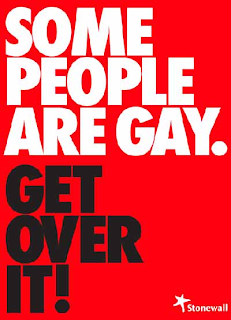 I got called a faggot on the bus home last week. I was quite amused actually. It felt so retro and dated. I’ve almost grown to love some of these quaint old words for what I am. Maybe I’d have liked it less had I been alone at night somewhere less crowded.


I was with my partner on the bus and a group of six teenage boys were misbehaving, shouting out remarks and jumping across the aisle punching each other. To summarise, I got a bit uppity when they started talking about girls they’d like to bang (their words) and how they’d go for the ones who couldn’t fight back and would just lie there and take it against their will.


I have these moments when I see red (usually in cinemas, on public transport or when I get bad service) and struggle to hold my tongue. I contain my anger and am usually quite assertive and reasoned. I attack the issue like I’m a middle class woman in M and S complaining to a young whippersnapper of a boy about a bad lettuce, cold and aloof.


Naturally they called me a faggot amongst other things. They would do. It’s the easiest target and requires no wit or thought and although I’m not over the top camp, I’m easily identifiable as gay. Had I been fat or old then that would have been mentioned as an insult. We’re allowed to call people fat or old too as well as shout homophobic remarks. The word itself didn’t offend me although the venom it was spat out with took me back slightly. They surmised that I took it up the arse (good guess boys!) and had a backside like a wizard’s sleeve (bad guess and unoriginal cliché). I generally just felt that they were making idiots of themselves and felt faintly amused but maybe I should have been more angry and affronted?


I spent much of my teenage years having names shouted at me at school by other children and occasionally by teachers. It was the 1980s. Homophobia came as standard. I came out aged 15 at a comprehensive school in the Midlands. It was going to happen. Were you to ask me my nickname at school I would reply Poof or Gaylord. I always laugh it off (and tried to at the time) but it was actually not much fun at all and at times left me feeling vulnerable, despised and tearful. My parents also had a cache of anti-gay names they’d hurl at the TV when Boy George was on Top of the Pops or bandy about at the dinner table. That was never very comfortable either.


Working in a shop in my teens, there was a regular customer who’d come in to try to shoplift. If I spotted him and got in his way he’d shout “Yo! Battyman!”  I didn’t know the term and thought it was an affectionate nickname so would always wave back and smile.


I still get a knee jerk reaction when I hear homophobic terms. They take me back and raise a tiny hackle or two. I’ve tried owning them and that works to an extent. Calling myself queer or poofter does have a strong disempowering effect on the words. My friends affectionately call me names too which is fine by me. Who can blame them if I call them myself or my friends too? I recently posted a photo of myself on a social networking site wearing a cravat (it was vintage chic, before you start getting funny about it).  The comments generally followed the theme of “You are so GAY!” I’m not sure that’s an insult. Is there anything wrong with being gay? I am gay. It’s a fact. Maybe there’s something wrong with wearing a cravat, but it did match my blazer well and bought out my eyes.


My pet hate currently is the use of the word “gay” to denote “crap”. It sends out a terrible message and is regressive in every way. I hate how people in the media have got away with using it too. I wince when I hear people on the bus calling things gay. I once asked an acquaintance who used the word in that context what she meant and she said by saying gay she meant “crap”. Goodness that made me feel warm inside. I avoid her now.


Words do have a lot of power and the old saying is wrong. Names can hurt you just like sticks and stones but maybe in different ways. Look at the statistics of mental illness, suicide and drug and alcohol abuse in gay people and consider what it is makes us prone to these problems. It doesn’t take much thinking to see that the undercurrent of both explicit and implicit homophobia is a major culprit.


I’m not 15 anymore. I can cope with name calling better than before. The thing is though, I’d really rather not cope with it at all.