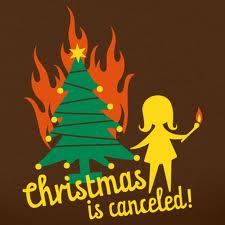 There tend to be questions that I often get asked which amuse me and being the person who invented over-sharing I may answer a few on here.
The commonest questions are:
1) When did you know you were gay?
2) Why don't you eat meat?
3) Why don't you drink alcohol? Sometimes followed by...Oh, are you an alcoholic then?
4) Why do you hate Christmas so much?
5) Doesn't your job depress you?
I've decided to address the one I get the most stick over. No. being gay but Christmas. Apparently it's not allowed to dislike it and to not celebrate makes you mean and grumpy. There's even special words for it like Scrooge and Grinch (I hate you Dr Seuss and Charlie Dickens for that). I'm not mean but am a bit grumpy at times. It's kind of odd that in a country peopled predominantly with atheists and agnostics we get so hung up over a Christian festival.

One question I'd ask is what's in Christmas for me? I'm a childless atheist, who doesn't like over eating, am not too struck on the whole family togetherness thing, I don't drink or eat chocolate and I don't like shiny sparkly things. I work as a nurse, so time off and having a holiday doesn't come into it. As for presents, I have a lot of stuff already and call me ungrateful but the whole I'd rather choose my own stuff. That's not to say I haven't received some great presents over the years but generally, I know my own tastes a lot better than you. Personally I'd rather you buy me a present spontaneously and not just because it's December and someone else's birthday. The whole present thing is rampant consumerism gone mad with a lot of debt being accrued for essentially worthless stuff. I think the term greed-fest may be a better term for Christmas as a lot of it now seems to be about avarice.

Christmas decorations? I love my house, it's clean and uncluttered. I don't want festoons and tinsel. Yuck.  Christmas meals out? Don't even get me started on the crap they mass produce and peddle in December. Christmas songs? Come on...Slade, Wham and Wizzard? They were always shit. We don't need them reviving annually.

I think people assume I've had a lot of bad Christmas experiences but that's not the case. The time my gran had her leg chopped off on Boxing Day wasn't the best but hey ho... The time I had flu, the time my ex partner,  and I decided we'd spend a final Christmas Day together as we were about to split up (was I on crack at the time) and he got pissed and smacked me one with the tree wasn't so hot either but we live and learn. At least the fairy lights were off or it could have been nasty. I did get dumped by a bloke I'd been seeing for 4 months at 6pm on Christmas Eve in 2009 but hey ho...turned out he wasn't quite the gentleman he'd been purporting to be and although his timing was bad, in the long run he was certainly no loss.

My main beef with the whole thing is why I can't make the choice to avoid it. From the first cards appearing in the shops in August to the saturation of all media and being the main subject of conversation everywhere, it's unavoidable. I've tried, believe me. Sadder still is the people who are lonely, sick, bereaved etc who are having all that fake stuff about how everyone else is having a fantastic time rubbed in their faces. Try being a nurse at Christmas. If your parent or partner is ill then it magnifies your misery.

I actually gave up smoking one year for 9 months and started again on Boxing Day one year as it was driving me so crazy....no excuse, I know. That was a mad thing to do.

I will confess to two things I like about it...The Waitresses singing Christmas Wrapping and the Tim Burton film, The Nightmare Before Christmas but even so, I'll be turning off my tv and radio, avoiding shops and restaurants and spending no money at all. Last year I took the oppurtunity to spend two days catching up on chores and reading in bed. It was bliss. I'll be the one in January going on jaunts with all the cash I've saved avoiding the tackiness whilst you lot wonder why you bothered with it all again and what that was all about.

(Disclaimer: anyone calling me the Grinch can go fuck themselves)

Very funny and I can identify with what you say a lot! X

Well said! The lack of choice in the matter is staggering, almost as if it's illegal even to be indifferent to the day.
I do actually like Christmas in the sense of a goood night out, a few pressies and a nice cosy meal - not the consumerfest or hysteria you get from September onwards.
x

totally agree!!
i do like the sparkly things and lights but not much else. it's always a let down and depresses me!

Oooh dear chris u know i'll still try n wish u merry xmas even if the retort will be fxxk off,but some things i can relate too but each to their own oh and happy hogswatch