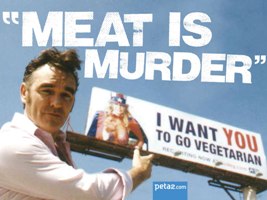 I said I'd work my way through the list of questions posed in my post "The C Word" and as I'm a man of my word I'll tell you why I don't eat meat.

This may shock you but I'm not very interested in food. It bores me. Eating can be a total pain. It interrupts what you're doing and means you have to cook which in turn means that your nice clean kitchen gets all grubby which is no good at all. Ovens are great places to keep books. Don't get me wrong, I enjoy a nice meal out and if you want to cook for me then that's fine and dandy but if it was a choice between food or books or cigarettes then the food would always lose. I tend to watch TV whilst I eat. I turn on the TV, start to eat and the minute the meal ends, I turn it back off. It stops me having to think about it. I can happily eat the same food every day too without getting too bored. It's like scratching an itch.

A friend once told me that she lay in bed and dreamt of food. She said that her first thought on waking was "What can I eat today?" Bizarre. I hate the feeling when you over eat. That sluggish torpor and the feeling of being full to the neck is not my idea of fun. It's a torture.

I don't really like cooking much. It's tedious. As for baking, they sell cakes in shops. Why waste your time? You could be reading a good book.

During my career as a nurse, food has been the one thing that has consistently made me heave and retch. I can cope with excrement, urine, vomit and phlegm but show me a bowl of congealed Weetabix or a lump of porridge stuck to an old lady's cardigan and I'll run a mile.

As a child I hated to eat. I hated meat, salad and vegetables. Unluckily for me, I had parents who were as snobbish as Margot and Jerry Leadbetter but with the horticultural skills of Tom and Barbara Good (from the 1970s sitcom "The Good Life", if you don't recognise the allusion). My parents had a huge allotment and grew huge quantities of fresh vegetables which we would have to eat all year round. They sowed, picked, blanched and froze and we had to help. They also loved to cook much more than I hated to eat. I compromised a little and would eat peas and carrots and the occasional runner bean. This wasn't enough of a compromise and I spent many hours sitting in a chair, not allowed to leave the table or lay down my cutlery until I ate one Brussel sprout or a sprig of broccoli. I was stubborn but my mum was the mistress of stubborn. Meal times were a tense battle which I usually lost.

We had to eat at the table as a family every night, which I hated. I secretly thought I was probably adopted anyway, so why did I have to spend time with these people? Meal times were often the subject of tense discussions about things too.

I devised a few tricks. Firstly: the dog. He was my food ally and was a canine dustbin. He'd eat anything. I'd try and lure him into position under the table and artfully flick half my dinner into his waiting jaw. He suffered a lot of wind due to his varied diet. Secondly: the swallowing trick. With enough gravy or sauce applied liberally I soon mastered the technique of swallowing most foods. I worked up from peas and eventually was at the point where I could swallow a sprout without it touching my tongue. I still hate sprouts. They were invented by Satan. Thirdly: the pocket game. With a tissue laid on my lap, I would secrete food under the table and stuff it into my pocket, consigning it to a watery grave down the toilet as soon as the meal ended.

I ate so little that eventually I was allowed to have a side plate instead of a dinner plate and no one worried about it. I wasn't anorexic. I just didn't like eating much. I expect if it had been any later in time than the 70s and 80s I'd have been put into therapy.

I did like sweets. I'd line up a pile of dolly mixtures and play my favourite game. This was called "Mummy" and involved scoffing a load of sweets which represented my pills. I'd pop them one by one as I held aloft a little glass of dandelion and burdock and a candy cigarette and feel grown up. I would inhale deeply and sigh and pop another "pill" with a swig of my "sherry".

It wasn't too much of a leap for a teenage food hater to become a vegetarian. A love of "The Smiths" gave me a fantastic idea. Not eating meat was cool and trendy and would annoy my parents to the highest degree. Every teenager's dream, I think. I recall a Christmas dinner as I smugly nibbled a cheese and onion quiche, aged 14, whilst my parents looked on and frowned. I soon got bored of it, though and was back eating meat.

As I got older, I started to enjoy food more. On leaving home and moving in with my older drunk of a boyfriend, I experienced real poverty for a time. We often had no money at all. I can't think where it went but I think the tills of various pubs and off licenses were ringing out a merry tune. I had a priority list: cigarettes came top. As long as I had cigarettes I could live on Happy Shopper biscuits and bread.

I made a terrible mistake in 2004. I was watching TV (a rare event) and flicked through the channels onto a program on BBC2 about abattoirs. It was repulsive. I cringed as I watched but couldn't turn it off. The next few days I found eating meat a weird experience. I couldn't get it out of my mind that it was a corpse I was eating. I felt sick. It rolled around my mouth, sticking there and I couldn't swallow. I gave up meat. My partner was disgruntled. It meant mealtimes were trickier but we got into a routine. It wasn't high moral principles that stopped me eating meat but pure over thinking and subsequent disgust.

I had a brief lapse in 2007 when me and and my partner split up and I was temporarily living with my best friend. It was alcohol related and involved a plate of chicken nuggets which I fell face first into. There's no meat in a chicken nugget though, really, so it's all OK.
Posted by C at Thursday, July 21, 2011