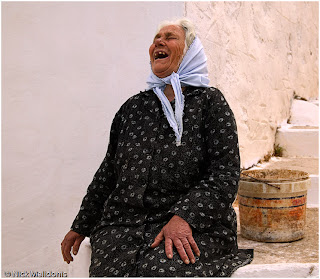 I arrive at Corfu airport and my eyes alight on the overflowing ashtrays with delight. I can smoke: anywhere. In fact, it's almost compulsory to smoke everywhere and cigarettes are 80p a packet. I'm going to fit in here. There are big strapping policeman standing around in tight trousers toting huge guns. I am definitely going to like it here.

It's the first time I've taken a package holiday. I'm 28 and beside me is the volatile and over critical man who I've spent the last 12 years with. He's 52. It's 2000 and we're going to split up later that year, which neither of us knows for sure yet, but we both suspect (and I'm hoping) will happen. This prospect fills me with joy and trepidation and him with dread and desperation. Naturally, he's a little drunk.

The resort in Corfu isn't quite how I imagined it but it will suffice for a week. It's tiny; a little stretch of coastline, olive groves, a beach and a smattering of tavernas. There's one labelled "Discotheque" which amuses me. I like that word. There are hardly any English people about with most of the other tourists being German or Greek.

Our apartment looks like it would maybe have featured in the ideal home exhibition circa 1962. The tiles are psychedelic orange and the bath is turquoise. I quite like it, in spite of the bizarre arrangements with the toilet paper and a small pedal bin and the total lack of a shower curtain which means the bathroom ends up soaked when you wash. It has two big balconies for me to sit and read on and the rooms are airy and whitewashed. Its 15 minutes walk from the beach and bars and very rural. Rural worries me. I'm a natural city boy, growing up in the centre of a large town which now calls itself a city. I get twitchy if it's too dark at night, there's wildlife and nowhere to buy cigarettes at 2am. I like birds and animals and nature often amazes me but I like it behind glass or chicken wire, where it can't bite or scratch me.

There are other residents nearby. Across from us a young gay couple intermittently sunbathe, row and talk about clothes and Madonna. They occasionally retire to their room and have noisy sex, which is my cue to swap balconies, blushing to myself. They seem to finish quickly though, so it's not a problem. One of them is being quite mean to the other which worries me. He seems to be a bit of a bully. Below us a woman paces on her balcony looking bored.

I try to get settled in but my partner insists we go out to buy drink for the apartment. We cram the cupboards with Metaxa and cheap Greek spirits. I haven't drunk much for many years but I decide to join him this time. This holiday is part of the process of him trying to retain me. The campaign includes him creating a study for me at home and him buying a car. After 12 years of ignoring me, frequently hitting me and generally being a cad, he's decided he's going to try to win me back. I know it won't work and anticipate a long week. The cheap brandy will help, I think. I also discover that Jack Daniels tastes nice with Fanta Lemon.

His resolve to impress me lasts until we hit the largest of the handful of tavernas. There's a pretty young Greek boy of about 15 or 16, working there, all pouting lips and dark eyelashes. He can't stop ogling him. He's almost licking his lips with lust. The trouble with meeting a man who fancies teenage boys is that it's fine when you're a teenager yourself, but unfortunately for him, you grow up and he no longer has what he desires. I don't especially mind as the boy's uncle (who is more appropriately aged at around 35) is providing me with enough diversion. He's ex army, big and blond with a stunning jaw line. I do mind when later in the week I spot my partner trying to covertly photograph the adolescent. The difference between being a dirty old man and a dodgy paedophile is just one small step and I tell him so.

There's a livelier bar around the corner and there's a "crazy" DJ in requisite silly wig and big shades. It's always empty. The DJ shouts "Hello boys!" each time we go in and to demonstrate his eagerness to please, he always changes the music to something by gays and then gives us the thumbs up. I find this amusing and to be honest, Erasure, Bronski Beat and Soft Cell are fine with me, if a little dated. I do get sick of The Village People after a few days, though.

There are dogs everywhere and thin cats with mean faces parade the streets too. Oddly the dogs all seem to be pedigree. We find a nice taverna where the food is good and I like the Greek dishes. It's overhung with wild jasmine which rails over a series of rafters on the outdoor terrace and provided I can zone out from my partner's voice, it's idyllic. One night a Yorkshire Terrier trots by our table, followed by a Great Dane, followed by a Toy Poodle. We get to the main course and two cats are sat with us. I draw the line during desert when a rat runs across the rafter above us and we don't eat there again.

I'm woken on the second day by a strange noise and get up and look out of the window. A small toothless lady has arrived to clean. She has skin like leather and is riding into the garden on her donkey, her mop strapped across its back. It's a bloody noisy beast. I avoid it as it looks fearsome. We have other visitors in the apartment. Small green lizards often scurry across the walls and at night bats swoop down and circuit the balcony. I like all this and I like walking in the evenings in the olive groves. We go to Corfu Town one day and I'm amused to see a Marks and Spencer shop but more amused to see a goat sitting in the doorway.

On the third day the power goes off and stays off for 2 days. We get drunk on cheap spirits and retire early but the nights are hot and long. I tan a little bit in the day but I'm a mere amateur compared to some of the other tourists who hit the beach at 9am and stay till 6pm, frying their skin to a shiny mahogany. I'm really bad at sunbathing. I manage about 20 minutes and start to get edgy and bored. I find it uncomfortable and dull.

We go walking a few times and I persuade my partner to go horse riding which I, surprisingly, love. I get a really odd horse that's the largest of the group and the most awkward. He walks a little then stops to grab at a thistle or weed. He then runs like hell to catch up, sending me careering around his back. It makes me laugh but I'm sore the next day. My partner, with his usual kindness, tells me it was my fault and that I'm too stupid to handle a horse, which washes over me like muzak.

We see the woman from the apartment below around a lot and she stares at me continually. She's quite plain and badly dressed and is always alone. I get a bit sick of her staring and wonder what her problem is. My partner finds the two young gays across from us fascinating but thankfully they leave after a few days, before he gets caught in acts of voyeurism.

The week isn't as bad as I thought. I eat well, for a change, enjoy the scenery and read a lot. It's primitive in the village but charming with it. I wish I had a book of "I Spy Pedigree Dogs" to tick off as the Crufts parade of strays goes by. The old Greek ladies seem to take to me and chatter away in Greek to me wherever I go, treating my shy effeminacy like a novelty. I learn a few Greek words to be polite and they smile big yellow grins. I'm lonely though. I wish there was someone to talk to and I spend hours looking out over the balcony into the forest, thinking. The big woman below is often there, beneath me, looking out too.

The holiday strengthens my resolve to leave him and I know I must do it soon for the sake of my sanity. I feel mean being with a man I don't love anymore, who bores me and makes me resentful and mean too. It's dragging me down and I regret that my last attempt to leave him was abortive.

The day we leave, the woman below us is waiting for the same coach. We get talking and she tells me she's had a terrible holiday. She came away alone as her friend had had to cancel and she's spent the week feeling lonely and isolated. I wish I'd known sooner. She's lovely and we talk all the way to the airport. I deduce that the reason she was staring at me was that she wanted to talk and maybe spotted a fellow lost soul.

I swap seats on the plane with a very posh boy who's very nauseated with food poisoning. He needs to get to the aisle easily as his bowels are churning. My partner glares at me as it means I'm separated from him and he can't speak at me or belittle me for four hours. I enjoy the flight home.
Posted by C at Friday, August 05, 2011