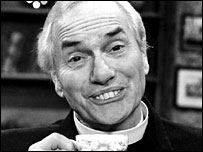 I keep passing a sign on my way to work outside a local dentist advertising “Snap-on-smiles”. The picture shows a hideous device like those comedy false teeth you got in Christmas Crackers in the 1970s. It’s a fake set of teeth that you simply snap on over your existing rotten yellowing teeth to con people into thinking you’re a Hollywood film star. I imagine they’re rather expensive too.


I find this whole white teeth obsession puzzling. My teeth are a healthy off white and yellow combination with a smattering of iron grey fillings which are revealed if I laugh loudly. I often laugh loudly. I’m actually quite proud of them. Having rotten crooked teeth marks you out as being British. We’re famous for them throughout the world. We have a variety of patterns and shapes and the colour spectrum is represented beautifully from battleship grey to canary yellow through to eau de Nil.
I watched an old film last night from 1961 of “The Roman Spring of Mrs Stone” by Tennessee Williams. The film was a weak adaptation in spite of Vivien Leigh doing miserable and deranged as only she could, but what distracted me most during the film was Warren Beatty’s teeth. Warren Beatty played an Italian gigolo with a bottle tan and a dazzling set of huge white teeth. They were most disconcerting and constantly took my mind off the plot and dialogue. It became a dental fiesta. The lights were dazzling, reflecting off his huge mouth full of frightening dentition.
I wonder why we’ve become a nation now obsessed with having sparkling white, perfectly straight teeth when in reality they look pretty scary. There’s nothing quite as disconcerting as an ordinary British person who has teeth which if caught in the right ray of light could remove your cataracts. Perfection doesn’t look good. Take the example of women who plaster on foundation make up with a trowel. A pure matte, evenly coloured face looks odd and unattractive. They look much better with a hint of the natural, a bit of variety of tone.
I’ve had a long running issue with my teeth. The dentist says it’s genetic and I firmly hold with that. I clean, floss, gargle and have regular check-ups. In spite of that I have fillings, veneers and crowns aplenty. When I gave up smoking once for nine months, I chewed so much sugar free gum that half my fillings crumbled away with the repetitive action and I ended up spending more money on dentistry than I ever saved through not buying cigarettes. I started young. I had fillings in my milk teeth. I was a frequent visitor at the local NHS dental clinic and had to have various teeth yanked out due to an overcrowded mouth. I became a bit dental phobic and stopped going at all once I grew to adulthood.
I was scuppered one day by an abscess and had to return in my mid twenties for a clutch of fillings. I managed to temporarily overcome my fear until a year later a wisdom tooth rotted. The dentist decided to pull it and I’ll never forget his face when the tooth made a decidedly nasty crunching sound and he snapped it in two.
“I’m afraid this may be considerably more complicated than we first thought.” he said, grinning and placing a box of large metal corkscrew type implements on my chest. I left an hour later, dazed and covered in blood with a bruise on my chest where he’d rested his knee as he played tug of war with my tooth fragments. I remember staggering out and trying to light a cigarette and almost falling into the road in a dramatic faint. I didn’t go back for a few years.
Let’s face it, dentists are invariably wealthy. They’re sneaky blighters, always looking to make as much money as possible. Have you ever met a poor dentist? I don’t trust them at all. My current dentist advertises dental whitening parties especially for Christmas. You and your friends and colleagues can all have a lovely party where you spend huge amounts of money to get glow-white teeth. Sounds fun, no? Not my kind of party and not my idea of an investment.
Ultimately, I don’t want to blind people with an unnatural smile which eclipses all my other facial features. I don’t want to look like an Osmond circa 1978 or a crazed Mormon door stepper. I certainly don’t want to look like Mr Ed the talking horse or a comedy vicar from an old situation comedy. I’m happy with my grotty old teeth. They chew food and serve me well. Receding gums, crooked smiles and stains are good enough for our aristocracy so they’re good enough for me too. Leave your teeth alone, you’re fine as you are.
I’ll leave you with the words of Spike Milligan:
Teeth
English Teeth, English Teeth!
Shining in the sun
A part of British heritage
Aye, each and every one.
English Teeth, Happy Teeth!
Always having fun
Champing down on bits of fish
And sausages half done.
English Teeth, HEROES' Teeth!
Here them click! and clack!
Let's sing a song of praise to them -
Three Cheers for the Brown Grey and Black.
Posted by C at Thursday, December 08, 2011

Awesome post, where is the rss? I cant find it!
[url=http://androidphone7.livejournal.com/]Android Phones[/url]

Thanks for all of your work on this web page. I am looking forward to reading more of your posts in the future.

I've added an RSS feed link on the web page