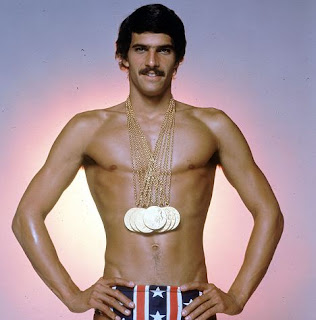 I have to say it. I am less than thrilled at the prospect of the Olympic Games. I struggle to understand most sport and what the appeal of either playing it or (even more mysteriously) watching it is. I can never follow the storyline, the characterisation is dull and it’s often done outdoors in a draft. There are so many weird mysteries: why listen to sport on the radio? Isn’t it a very visual thing? Why do people get all jingoistic and over excited? What’s with all the sudden bursts of over blown nationalism?


I’ve always hated sport. I hate the drone of the crowd with its menacing undertones of future violence and aggression. I hate the incomprehensible rules. I can’t even stand to be in a bar or room where sport is playing. If I’m in a taxi where the driver has sport on the radio I have to grit my teeth as the sound of it puts them on edge.


So the Olympics? I love men’s gymnastics and diving as much as the next slightly perverted gay man but apart from the prospect of men in trunks I fail to see the point of it all. I’m not sure why I’m supposed to care if a burly Finnish woman can throw a spear further than a burly Russian woman. I don’t care and can’t understand the relevance of it all. Is it that important in 21st century society who can run the fastest? We have cars and stuff. The trains aren’t bad either and you can read when you’re on them.


I totally hate Lycra. 0.001% of the population look good in Lycra. The TV schedules will be stuffed to the rafters with tedious hours of people standing about, running for a few minutes and all the time a man will waffle on abut inconsequential crap. The streets of London will be a no go area and I for one won’t be planning any theatre or gallery trips this summer. I’ll steer well clear.


And the sponsors of the Olympics? Sweet and fast food manufacturers. It’s about as appropriate as Gary Glitter endorsing a new nursery or Rose West extolling family values. As for the Olympics, there's something so dated about it all. It makes me think of the 1970s.


Thank goodness I have such a good collection of books. I can hopefully avoid it all. Well, I could avoid it if it wasn’t already being mentioned every 30 seconds on every form of media. Oh well. Perhaps I’ll hold my own mini-Olympics at home. Anyone up for taking me on in the Benson and Hedges world smoking fume off? How about the Cluedo Championship? If all else fails I can at least hope for a high ranking in the Yahtzee event.
Posted by C at Tuesday, May 01, 2012